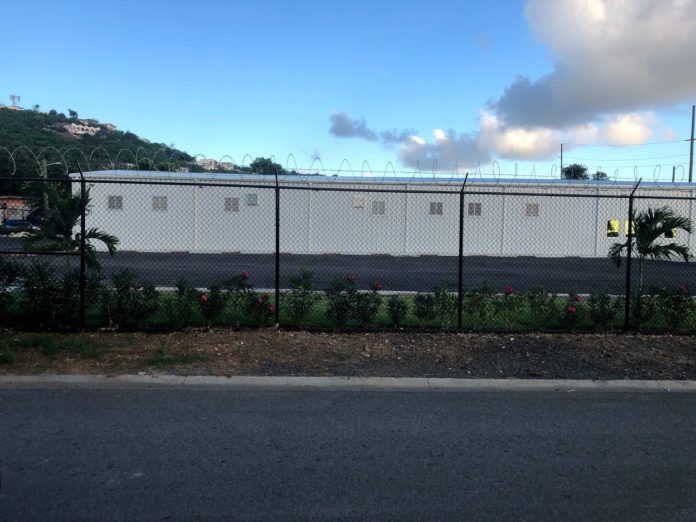 Five years after the Virgin Islands Port Authority set out to modernize facilities around the Cyril E. King Airport, officials dedicated a new maintenance building Thursday. Some of the people who helped make it happen were on hand at the dedication ceremony on St. Thomas.

Officials on hand for the ceremony called it a good day for the honoree — former Port Authority Board Chairman Robert O’Connor Jr. — and the agency’s engineers and maintenance workers.

Since 2016, when a developer began tearing down the World War II Navy aircraft hangar that served as a workplace, the division has had no permanent place of its own.

Now, repair and upkeep of the Cyril King Airport will be directed from a modern, one-story structure with a parking lot and chain link fence in Bornefield, across the road from a private air strip, also operated by the Port Authority.

The company providing ground services and fueling operations for the air strip was credited for completing the project, which began with a projected cost of $1.6 million.

Port Authority Director Carlton Dowe and Senator Donna-Frett Gregory were among those offering remarks on Thursday. Both spoke about the circumstances that brought about the deal and the work of modernizing the facility.

As he offered his congratulations, the agency’s engineering director called the new building an overdue improvement.

“Having had the unfortunate experience of traversing the old maintenance facility on numerous occasions, I can attest that this new facility is a much needed and welcomed upgrade,” said Port Authority Director of Engineering Damian Cartwright. “Agencies like ours have budgetary constraints and given the cost of capital infrastructure, how do we get to the 21st Century unless we incorporate and bring in the private sector?”

At the time the agency solicited project proposals, Frett-Gregory was chief financial officer for the Port Authority. The agency had little in the way of revenue to work with and Dowe was complaining that year after year, the board would cut the budget of the maintenance division.

The thought of making a change seemed daunting.

“[Dowe] was relentless in approving the revenues and the maintenance situation we had. There were those who doubted the plan and questioned the viability of the project. But today, we stand on the grounds of the new maintenance building, a vision that began five-plus years ago,” she said. “This project is a fine example of what can happen when we engage in public-private partnerships.”

On the private side of the partnership is Standard Aviation LLC. Dowe said Standard was one of the companies responding to a Request for Proposals to upgrade airport structures, issued in 2014. In exchange for a Port Authority lease, Standard offered to build a new aircraft hangar, the maintenance building and give the agency a share of their revenues from refueling private jets.

The lease that was awarded included favorable terms for the rent the company would pay to Port Authority.

In 2015, the board, chaired by O’Connor, took the deal, and demolition of the old building began.

Dowe recalled the doubts of board members at the time. Shaun Miller, the representative for Standard Aviation, was not well known on St. Thomas.

Some questioned Miller’s motives. “I found a partner that said what he meant, and meant what he said back then. And we are here today,” Dowe said.

Speakers on Thursday praised O’Connor for his leadership as board chairman and the 20 years he spent as a board member. Port Authority Public Relations Director Monife Braithwaite praised him for displaying a firm and calm leadership style.

“Mr. O’Connor served on the board of the Port Authority for over 20 years, and during that time was elected several times as chairman of the board. Twenty years. That takes commitment and a passion for this territory to dedicate yourself that long to public service,” Braithwaite said.

O’Connor also served as Senator-At-Large for two terms in the late 1980s and early 1990s. He ran a number of businesses on St. John and helped build the St. John Legislative Annex in Cruz Bay.

Senate President Novelle Francis noted that the fire station in Cruz Bay is also named for an O’Connor. Robert O’Connor Sr. — the honoree’s father — served as the islands’ top official in the V.I. Fire Service